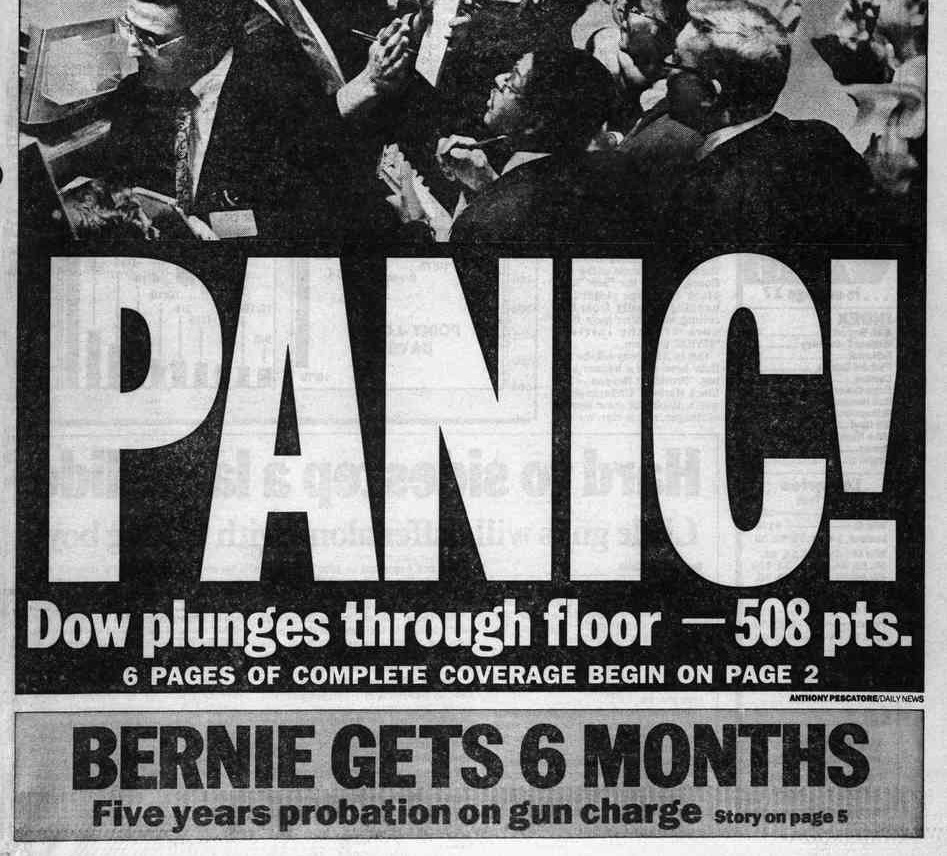 Headlines: The Daily Risk to your Retirement

Have you ever noticed a big slowdown on the interstate and wondered what it was that was holding up traffic ahead, only to arrive at the cause of the delay to find a beautiful view of a sun setting over a farmers pond that was so majestic everyone had to slow down for a longer look?  Or maybe a family playing fetch with their golden retriever on the front lawn?  Maybe a couple of horses galloping blissfully across a field?

Of course not.  Why would anyone slow down to view something peaceful, serene, or just plain normal?

For some reason, as humans, we are drawn to chaos and catastrophe.  The source of that long delay was almost certainly a multi-car accident, a house on fire, or an arrest in progress.  These are the types of things that captivate our attention and cause us to hit the brakes and take a longer look.

So, what in the world does this have to do with investing?  A lot, actually. One of the greatest risks to us as investors is what we call "Headline Risk", and it can cause us to make very poor decisions.

Is it starting to make sense why we see so much doom and gloom every night on the news?  Anyway, let's narrow the focus so I can make my point....

One of the areas that we feel the most pain and carry the most fear is in our pocket book.    We pay very close attention to what's going on with the economy because it affects that pocket book, especially by way of our investments.  When you combine that already heightened sensitivity with a media industry that's incentivized to publish scary headlines, you get Headline Risk.  While there are several variations of it's definition and impact, I would define headline risk as:  the risk of making poor financial decisions as a nervous reaction to scary stories put out by the media.

Let me give you some examples of headlines over the years that very likely caused a lot of folks to make poor long term investment decisions:

Fear of a Double Dip Recession Could Cause One New York Times-May 15, 2010

These are just a tiny fraction of the headlines we saw from 2010 - 2015.  Just based on the headlines, you'd think markets must have been awful during those 5 years, right?  Investors must have gotten crushed!

Now, how many folks do you imagine sold out of that market or never invested in that market because of the headlines they were seeing all over their newspapers and televisions?  I imagine a lot.  This is one of the major reasons that individual investors fare so much worse than the stock market overall.  According to a study of investor behavior and results updated annually by Dalbar, from 1986-2016 the S&P 500 has averaged about 10% annually, however the average investor only averaged about 4% during that same period of time.1  Could it be that headline risk is preventing us from participating in the gains in the stock market?

It goes a little something like this:  We feel some pain from a market pullback, we read some headlines about things surely collapsing, we sell off our investments to avoid impending doom, and then we sit on the sideline while the market finds it's footing and rallies higher.  We sold low, now we have to buy back high.  When we buy back in, the market is at new records and goes through a normal correction.  The media pumps out a bunch of scary headlines again, we get nervous and sell again just before the market finds it's bottom and rallies much higher.  Wash, rinse, repeat.

Now, Headline Risk can also work in the opposite direction.  Sometimes the headlines can lead us to believe things are better than they are.  Take a look at some of these headlines from the years leading up to the Great Recession of 2007-09 where the stock market fell by about half.  Keep in mind this crash was triggered in large part by the housing market and subprime mortgages:

We all know what happened after that....But again, if you're making investment decisions based on headlines, you were probably digging through the couch looking for spare change to throw in the stock market.  According to the news, the stock markets hitting records, the housing industry is booming, the chairman of the Federal Reserve is telling us not to worry...

The point here is this:  Don't change your investment strategy based on what you're seeing on your TV, hearing on your radio, or reading in your newspaper.  These outlets get it wrong just as often as they get it right.  Work with an advisor to get a long-term strategy in place based on YOUR needs, YOUR time horizon, and YOUR tolerance for risk.  Don't change that strategy just based on headlines.  As I showed you above, headline risk can lead you very astray and cost you a lot of money.

This is meant for educational purposes only.  It should not be considered investment advice, nor does it constitute a recommendation to take a particular course of action. Please consult with a financial professional regarding your personal situation prior to making any financial related decisions. Indexes are unmanaged and cannot be directly invested into. Past performance is no guarantee of future results.  Investing involves risk, including the potential for loss of principal.